Harry Houdini needs no introduction, but there are several facts that people do not know about this consummate skeptic. That makes this book a must for everyone interested in psychics and paranormal claims. Just the Introduction to this great book floored me. How much we needed Houdini at the time. How much we STILL need a Houdini today.

Houdini was open-minded. He admitted he wanted to believe. He strove to learn if the possibility that one could communicate with the dead was real. In an attempt to convince himself, he had compacts with 14 people for post-death communication. He was sorely disappointed that none ever reached beyond the grave to give him evidence he needed. Meanwhile the “mystifier of mystifiers” (a term disgustingly co-opted by Uri Geller, the unimpressive psychic performer) met all the most famous mediums of his time to test this elusive idea.

“Gladly I would embrace Spiritualism if it could prove its claims, but I am not willing to be deluded by fraudulent impostors of so called psychics…”

In this book, he outlines his adventures with them, how he learned their secrets, and how he applied his knowledge of the tricks the mind can play. He was part of the initial era of psychical research.

Houdini was friend and confident to Ira Davenport who discussed tricks with him. He called Eusapia Palladino “skilled in misdirection” and “shrewd”. While showing sympathy for the hole that the Fox sisters dug themselves, he noted that their life was difficult but Margaret was undoubtedly sober when she confessed to the lie they were living. The still-discussed Daniel Dunglas Home was a “suave” and charming person who took advantage of his patrons and investigators. Houdini notes he was a thief caught red-handed. He exposed Dr. Henry Slade and slate writing as Houdini was able to duplicate his tricks and he eventually confessed. In a surprisingly blunt comment, he scorns Ann O’Delia Diss Debar as a famous criminal who blatently lied. She was a “moral misfit”, he says. “Better for had she died at birth than to have lived and spread the evil she did”. Wow. 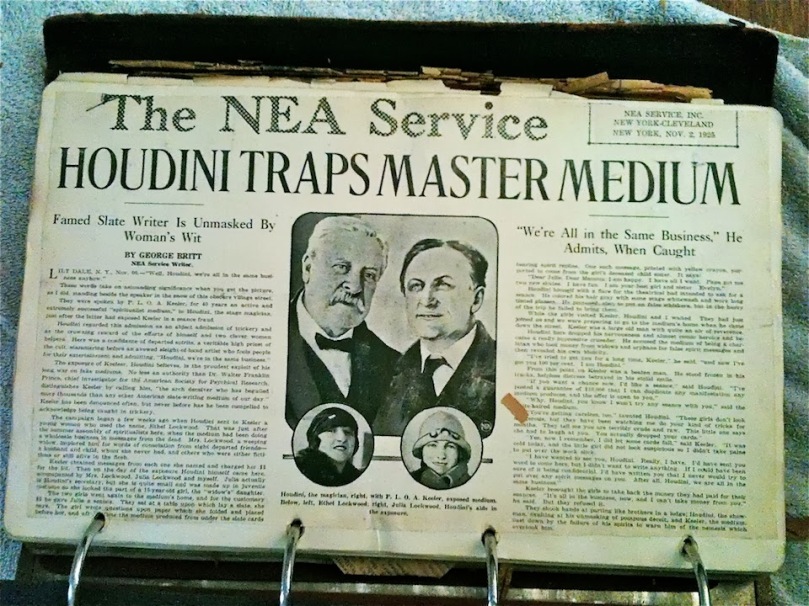 Houdini had at his disposal the testimony of people who made and supplied props to magicians and psychics. Yet, it took him several attempts at observation, typically three, to determine how the mediums were pulling off their stunts. He admits an important caveat – it is impossible to detect and duplicate all feats of mediums, not because these feats are genuine, but that they are done in the spur of the moment, taking advantage of a special circumstance. Sometimes those circumstances can’t be recreated. And often the story provided by the sitter gets exaggerated as it is repeated, and they believe that embellished version.

In the conclusion he is startled by the “utter inability of the average human being to describe accurately anything he or she has witnessed.” With this tendency, a medium can easily accomplish wonders. These same mediums, he said, deliberately avoid honest investigation. What was not answered in this book was how Houdini managed to get into the audiences he did to make these observations.

Spiritualism claimed “many brilliant minds” as followers. Houdini noted author Arthur Conan Doyle’s belief and promotion of it had been “one of spiritualism greatest assets.” Conan Doyle was Houdini’s dear friend. He wrote that “honest friendship is one of life’s most precious treasures,” in reference to Doyle. The chapter about Doyle was heart-wrenching to read. Doyle comes off as incredibility pompous and pigheaded, even delusional. He underestimated people’s skills and overestimated his own capacity for being fooled. No matter how many cases of fraud Houdini cited to get him to relent, Doyle would not change his opinion on it. I don’t know how Houdini put up with him!

Doyle even wrote: “The objective side of [Spiritualism] ceased to interest, for having made up one’s mind that it was true there was an end of the matter.” It was a religion fueled by grief of those who lost loved ones. What would Doyle would have thought of Geller, the “mystifier”, or the grief vampires of today?

Things have not changed very much. James Randi, as well as Penn & Teller, and various outspoken skeptics have carried Houdini’s banner to expose the audience to what lengths charlatans will go to in their deceptions. It’s hard for us to imagine unless it is demonstrated how gullible we were right before our eyes.

There has been a monetary challenge for psychics to prove their claims since the time of Houdini. It continues today. No famous psychic will ever take it because they know they can’t win. They know they are fooling us or they are scared to be tested. This is fair evidence to consider they are all frauds, even if they don’t admit it to themselves. It makes no sense, Houdini says, to admit a trick can be done by natural means but then claim that THIS time, it was done supernaturally by a medium.

Houdini believed Spiritualism made people insane, it drove the reason out of them. Perhaps he saw how Doyle was in such a state about it. He wanted legislation passed to kill the movement. But here we are, still trying to put psychics that steal MILLIONS and ruin lives in jail all these decades later. And there remains a thriving, if much more intimate, Spiritualist community as well as a widespread belief that celebrity mediums can talk to the dead.

We own so much to Houdini;  we owe it to his memory to not forget his great work exposing frauds.

One final note that skeptics who fight “woo” should certainly know about this star among skeptics. Houdini didn’t believe in spiritualism, but he believed in God. That didn’t prevent him from doing his job to famously promote critical thinking. If you are going to claim that religious believers are “bad” skeptics, you will utterly fail in your attempt to say it of the Great Houdini.