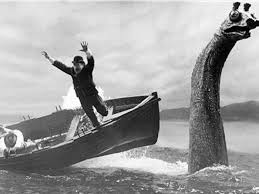 By coincidence, I was reading an old book on Loch Ness that I found in a used bookstore while the news broke of a new scientific project to take place on the lake. The book from 1977 – Search at Loch Ness by Dennis Meredith – was an overly sunny view of the Academy of Applied Sciences work over many years spearheaded by Robert Rines. Using sonar and underwater strobes and cameras, this crew produced most notably the 1972 “flipper” photos and the 1975 body and head (“Gargoyle”) shots among an array of odd sonar traces, all of which they sold to the scientific world, the British House of Commons, and to the public as proof of a large unknown animal that deserved further attention. Oh, how things have changed since this book!

I don’t want to review the whole thing but the optimistic and enthusiastic tone is remarkable. Meredith was the managing editor of Technology Review, the MIT-associated journal that published the expedition photos. He went with the crew to Scotland the year after the body and head photos were taken. With updated technology and several experts on board, they expected to really get the goods but they got nothing. A few unusual sonar traces were dramatically hyped (“Sonar was the star” – nice attempt at a save but, no) but nothing of lasting value was obtained. Some of the quotes are worth mentioning to illustrate the theme:

“It is a major breakthrough that today few reputable scientists will boldly declare that the beast does not exist; whereas in the past, few reputable scientists would declare openly that the beast did exist” (p 118). In other words, the presentation of the Rines photo evidence was perceived as being the game changer. Scientists supposedly were suddenly inclined to think something unique was there. This sounds like wishful thinking. Meredith describes some of the reaction from people like Gordon Sheals who were adamant these images were poor evidence and amounted to nothing biological value. They were justifiably annoyed at the attempt to officially name the creature based on the flipper photos “Nessiteras rhombopteryx”. Here we are 42 years from that time and you are hard pressed to find any scientists who will state some mystery animal is still out there to find. However… back to this later.

Regarding one sonar result, “The trace seemed so animal-like. One could almost feel a thought pattern in the pathway of the object” (p 132) Yikes! Belief in Nessie was the driver of the enthusiasm. Meredith leaned heavily on the animal looking like an elasmosaurus (a type of plesiosaur). From what? A few pictures? Unverified sonar readings? Eyewitness accounts. The plesiosaur idea has always been an enormous leap without any basis except “it looks like what the picture books show”.

The plesiosaur idea as well as the hope of any large animal living today that could fit this mythical construct has been demolished entirely since the Academy’s quest. The famous flippers were revealed to have been not only enhanced (which was admitted) but retouched (which was, basically, fraudulent). The original photos did not depict a huge appendage. The body photos were also interpreted with Nessie-goggles. This was not a creature gracefully gliding into view. The “Gargoyle head” that was a victim of the human propensity to find patterns resembling faces, was almost certainly a tree stump. In 1987, the Loch Ness Project retrieved what was almost certainly the same object caught in the famous photograph. The Rines stellar evidence, while not forgotten, has been discredited.

Several additional attempts to scour the lake for evidence in the following decades also came to naught. Subsequent sonar sweeps and detailed surveys found interesting things but no evidence of the illustrious Nessie. Additional ecological analyses showed that a large animal could not survive in this nutrient-deficient body of water. All arrows point squarely to the conclusion that there was never a plesiosaur in the loch. Perhaps a big eel or large fish, or some temporary large visitor caused some excitement but there is no particular species of Loch Ness Monster – the cryptid popularly established was based on eyewitness interpretations and imaginative stories developed far beyond what the data really said.

So why would another scientific project head there to seek it out? There may be new life yet to discover in the loch. University of Otago (New Zealand) professor Neil Gemmell was, like all of us, captivated by the myth of the loch and chose this location to undertake study to collect water samples and analyze them for DNA.

His team will take 300 samples of water from different points around the lake and at different depths. They will filter the organic material and extract the DNA, he said, “sequencing it by using technology originally created for the human genome project.” We’ll have answers by the end of the year. Two other lakes will also be sampled.

The DNA shed from all organisms can be sequenced and matched to existing records producing a list of animals that have been in the water. Because the DNA is extracted directly from the environment instead of the organism, it’s called “environmental DNA”. The technique is “revolutionizing biodiversity monitoring, occupancy estimates, and real-time detections of invasive species” and has already been used in the Great Lakes.

Regardless that the book is essentially closed on the cryptid angle, undoubtedly, this result will be interesting and useful. The water contains bacteria and possibly other animals that have not had their DNA sequenced for identification or do not match the existing catalog. The samples will also provide information about non-native, invasive species in the water.

Some people have expressed dismay at the marketing of the project using the Loch Ness mystery. The website, lochnesshunters.com, sells the project as a way to find out “what species live in that dark, mysterious loch.” Is it a bait and switch? Eh, sort of, but you can’t really blame him for framing it this way. Nessie is linked with the Loch itself. It’s possible the results will lead to a better idea of what is or isn’t going on in the loch that may play into its reputation. The project site makes it clear that the Nessie hook is a gimmick for attention. And it worked. The press attention was huge.

As the largest freshwater body in the UK, Ness is an excellent choice for sampling regardless of the myth. From the Loch Ness Hunters site: “The search of Loch Ness is about so much more than mysterious water monsters. It’s about cutting-edge science which will make a real difference in how we monitor and protect the worlds increasingly fragile ecosystems”.

Cryptozoological promotional material often touts the finding of new species as evidence that mysterious animals are still out there to be found. The definition of “cryptid” is pliable when required and stretched to mean any new animal that people have already known about but was subsequently revealed as a new species. That’s not legitimate. The founding of cryptozoology as a field was centered around animals like Nessie, the Yeti, Bigfoot, and other large animals that come with a rich history but are rarely seen and haven’t been established. They are most likely mythical but considered by many to be real living creatures we will eventually document. Cryptozoologists have not found new animals. New species are found in museum drawers or discovered living in the wild unnoticed because they look only slightly different from a similar species. New species that turn up unexpectedly, like bacteria, fish, or even small mammals, are not cryptids in the canonical sense. Bona fide cryptids come with mysterious baggage. They have slipped into paranormal or supernatural realms after decades of diligent search has failed to turn up legitimate credible evidence to confirm them. DNA (or the finding of remains) is the way forward for cryptozoologists to prove their efforts are not in vain. Yet, the outlook for obtaining specimens of these headline cryptids grows dimmer by the day.

That which is considered “cutting edge” changes very rapidly. Rines technology was new for its time but the data captured was not scientific or robust. Environmental DNA will give us exponentially better results about what lives in the water, even though it’s already established that there is no true cryptid in the loch.