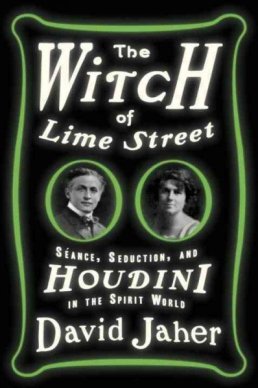 A review of The Witch of Lime Street: Séance, Seduction, and Houdini in the Spirit World by David Jaher

This is a story of Spiritualism in America in the early 1920s. The darling of the psychic scene was Margery (a faux name) intended to hide the identity of Mina Stinson Crandon, a young, outgoing wife of surgeon Dr. Le Roi Crandon, called “Roy” in the book. The title is a reach that comes from Margery’s claim that she would have been called a witch 150 years ago. Instead, they sent scientific committees to examine her.

Witch has a few things going for it:

But I was not too impressed overall and would only give a rank of 2.5 out of 5. It missed some sources that others have covered. The wikipedia entry is more direct with information and conclusions. Of course, this book is meant to be more of a casual read for entertainment and leaves several conclusions unresolved.

I did not care for the author’s style of writing and found myself confused several times, having to reread a paragraph to understand it. I didn’t much care for the organization of the book. It’s basically chronological but it does jump around and leave wide gaps open in places. The main story of Mina’s psychic powers does not appear until page 122 and we are left in the dark about how she discovered her new found talent. Walter, her brother who died at age 28, is her spirit guide. Walter is an annoying jerk.

The doings at Scientific American provide the backbone for the story. Testing psychics and providing a cash prize was as fraught with problems then, just like it is today. They don’t want to be tested. They have it too good. They make excuses and can weasel out of being caught. They get nabbed cheating or they can’t perform under controlled conditions. Houdini was one of the five judges on the committee set to test the medium who came highly endorsed by Sir Arthur Conan Doyle.  By far, Houdini is the most hard headed and self-confident. He clashes and yet still remains cordial with Doyle and Margery for a time. He was not to be duped while it is alleged the rest of the committee fell for the charming affectations and sexually charged antics of Mrs. Crandon. Hence, the subtitle regarding seduction. This seduction aspect is treated superficially, the similar to how Houdini is portrayed as being too modest about Margery’s sexuality. It’s a light touch which ends up, to me, missing a very important point about female empowerment in Spiritualism.

Also missing is a decent explanation of the suspicions about the Crandons and their adoption of orphan children from Europe. I don’t feel like I get a coherent story and I’m left wondering if I’m to take seriously the suggestion that the manifestation of spirit hands during seances were human parts. I’d think that if you were going to suggest such a thing, you’d better explain it a bit more.

One of my criteria for a book’s value is what I learned from it. What was new to me was the embarrassing portrayal of bias by members of the SPR and ASPR making it appear that these institutions were inept. I’ll have to follow up on that.

Houdini is portrayed as an attention hound, revealing an investigation for his own gain. There is, however, some interesting bits to gain regarding Houdini’s personal life and behaviors that I found interesting. Also noted is how he collected news accounts of harm resulting from psychics in his campaign against the practice. He accused Arthur Conan Doyle of encouraging people to die to get to “Summerland” – equivalent to Heaven. Mentioned as a side note is Houdini’s special agent, Rose Mackenberg. I’ve missed paying attention to her story and must also look into this as well. She was featured in an issue of Junior Skeptic but is unappreciated by the wider skepticism community.

Jaher’s book reveals that as with all human social activities, there are two versions of the truth played out in the press and for an audience. And there are more than two versions of opinions of how things are. We are left unsure about what really happened here. I’m left with lots of questions. While a nice addition to a spiritualist book collection, it can’t be the most definitive volume on the topic. A summary of the career of Margery and this aspect of it can be found here.