The highly anticipated paper from B. Skyes regarding DNA testing of anomalous primates has been published and is, thankfully, freely accessible.

In 2012, the team from University of Oxford and the Museum of Zoology, Lausanne, put out a call for samples of suspected anomalous primates – Yeti, Bigfoot/Sasquatch, Almasty, orang pendek. The samples, if accepted, would be genetically tested using a cleaning method previously vetted in the Journal of Forensic Science that removes all traces of surface contaminants (most likely human) to get to the original DNA sequence. A specific portion of the DNA was used – the ribosomal mitochondrial DNA 12S fragment – for comparison to sequences in the worldwide genetic database GenBank.

A total of 57 samples were received. Two samples were actually not animal hair: one was plant material, the other was glass fiber. Those not trained in biology/zoology cannot always tell the difference between organic and inorganic matter or plant vs animal fibers, as we’d also seen from hunters collecting samples on the Spike TV show Million Dollar Bigfoot Bounty.
37 of the sample were selected for genetic analysis. 18 were from 8 U.S. states, including pairs from AZ, CA, MN, OR, TX. The rest were from WA, what is believed to be the prime habitat of Bigfoot/Sasquatch. 8 samples were anticipated to be the almasty from Russia. Three samples were collected in the Himalayan region of Asia and one came from Sumatra supposedly representing the orang pendek.

Let’s see what the results were.

One was found to be human – from Texas. That only one matched with humans is a testament to the rigorous cleaning method that removed contamination. Sykes revealed his thinking about Melba Ketchum’s paper by noting that human contamination often “confounds the analysis of old material and may lead to misinterpretation of a sample as human or even as an unlikely and unknown human x mammalian hybrid” (Ketchum, et al.). Therefore, her claim of rigorous forensic procedures is shot down, again. Incidentally, Sykes et al. does not consider Ketchum’s paper as a “scientific publication” likely because it was self-published. The Sykes et al. study is regarded as the FIRST serious study regarding anomalous primate DNA – he cites two others that were joke papers. Recall that Ketchum cited these in her paper as genuine, revealing her professional ineptness. While the Sykes, et al. paper lists Ketchum as a reference, it is only to cite it as a poor study, not within the valid body of scientific literature, with misinterpreted results. [Burn.] The quality difference between the two papers is remarkable. The Sykes paper is readable and understandable with minimal jargon and a clear presentation of the data and conclusions. Ketchum’s paper was gobbledygook and, with this new commentary on it, albeit subtle, is another death-blow to any further serious scientific consideration.

All the U.S. samples turned out to be extant (already existing in that area) animals such as cow, horse, black bear, dog/wolf, sheep, raccoon, porcupine, or deer. There very clearly was nothing anomalous at all.

All the Russian samples, at least some of which were collected by Ketchum associate Igor Burtsev, also were disappointing. There were two anomalies, however. Samples of raccoon and American black bear were among the Russian samples indicating either a mistake in the location of the samples or individuals of these animals were imported to Russia at some point and their samples left behind.

Sadly, the orang pendek sample from Sumatra turned out to be from a Malaysian Tapir. This is not the first time tapirs have faked evidence for a Bigfoot creature. But I suspect this sample was very disappointing since the orang pendek is considered to be a plausible cryptid – likely a new species of primate. However, this test failed to provide support for that idea.

The Nepal sample turned out to be a native goat, a serow. However, the other two Himalayan samples were the most interesting of all.

Not one but two samples, those from Ladakh, India and Bhutan, matched a fossilized genetic sample of Ursus martimus, a polar bear of the Pleistocene era, 40,000 years old. Note: TWO samples! There was not a match with the modern species of polar bear. Thus, the study has discovered a new anomaly! This result is a boon to bear studies. Future research will continue to look for more evidence of the representative animal, hopefully a living one. The paper is clear, as was the documentary on this discovered which aired months ago, this previously unknown hybrid bear may contribute to the yeti legend. The look and behavior are reportedly different from the other native bears. Is the Yeti a bear? Well, the yeti is a very general term and its description varies across the huge expanse of the world where it is reported to exist. Even the orang pendek, more akin to an orang utan, is sometimes referred to as a “yeti”. Therefore, the “yeti” is likely not just one animal. It is feasible that this new bear constitutes one version of the yeti. Sykes has been open in stating that it does not mean a primate Yeti is not out there. It just means this result was not supportive of that idea.

The main thrust of this paper hits the gut of cryptozoology. As it is practiced today by amateur Bigfoot hunters and monster trackers, it is not science. This paper represents science. It’s a high bar. I’ve said as much before. To do science requires very specific training. One result of the Ketchum fiasco and the Sykes “success” has been to educate cryptid hunters about genetics and reliable tests that can give them the results they desire. This project was an excellent example of amateurs working with professionals – exactly what needs to be done to make real discoveries and come up with better answers than “It’s a squatch”. 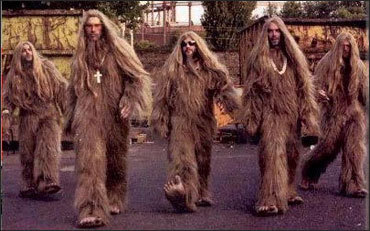 I’ve always disputed the claim from paranormal researchers (including cryptozoology enthusiasts) that science ignores their work. Scientists had previously been involved in the founding of the field of cryptozoology but also studies in the psychical research and UFOs. They looked, there was nothing there and they moved on. (See my thesis on amateur research and investigation groups, ARIGs)

Now, the modern field of cryptozoology has been put on notice. You need to raise the standards; you need to stop wasting effort. Blurry pictures or another FLIR recording of a warm blob is not going to constitute worthwhile evidence. We best learn about nature through a scientific process. That means amateurs must work WITH the experts, not rail against them.

I was very pleased with the results of the Sykes, et al. study. I look forward to his book release on this topic as well.