As one who runs a website about weird news, it’s been a crazy start to the year. A number of hoaxes proliferating around the media the first week of this year. They are passed on almost with the same respect as actual news. If you resolve to do anything this year, resolve to doubt the news when it sounds too outrageous or too weird to be true. Because it’s probably not.

There are too many urban legends and popular rumors going around to follow at any one time, but let’s take a quick look at some of the major hoaxes that recently created hype in the media.

Made for TV hoaxes

Not counting the Punk’d and Candid Camera-type practical joke setups that are humorous (if rather mean), several television programs aim their hoaxes at the public, making them realistic, and keeping the background a secret as the bizarre video goes viral across the web.

In July, in Whitstable, Kent, U.K, a video from a medicine shop’s closed circuit television showed a man surprised by a falling box. But before the fall, the camera captures the box defying gravity, levitating off the shelf, hanging there for a moment, then dropping.

Was this paranormal activity? (There were obvious signs that it was not.) It was such a fun video that it was passed around extensively. Finally, in December, it was revealed as a hoax for a TV show. The reveal happened on a broadcast that did not get good ratings. Most people may still assume the video was actual evidence for paranormal activity.

The case of the glowing squid-like mystery creature in Bristol harbor, also in the U.K., didn’t hang on quite as long. People in the harbor sounded amazed to see and film a bright, pulsating animal that did not look like a machine. It looked like something out of this world!

The prank was released on YouTube as part of a marketing stunt by UKTV’s entertainment channel, Watch, to launch the show “The Happenings”. I really wanted that bioluminescent beastie to be real.

Other viral marketing campaigns have occurred for movies and TV shows in the past. A photo showing a Civil War era crew with a prehistoric flying reptile was long ago revealed to be a hoax from the show Freaky Links. The photo still circulates around websites and forum. I’ve even seen it used in a presentation at a paranormal conference with no mention it was not genuine. It’s used as “evidence” that these extinct animals may be still alive in the U.S. – a fun idea but complete fantasy.

Paranormal investigators, UFO researchers and Bigfoot searchers have to deal with this problem. A considerable portion of the media coverage of their pet subject areas is about deliberate faking. Serious researchers get pretty angry about it. But, let’s face it, if hoaxes are probably the 2nd most likely conclusion behind mistaken identification, you have some serious credibility issues to overcome. The obvious hoaxers gain more attention than those attempting to remain respectable.

There’s an app for that

Unfortunately, hoaxes are easier and easier to pull off but harder to kill. Local media has a habit of falling for sensational stories. Submitters generate quick and dirty hoaxes with cell phone apps that add “ghosts” or “UFOs”. These apps are widely available and often free. You snap a pic of the surroundings and insert various UFOs, spirits, Jesus, or the Virgin Mary in them and amaze your friends. Or, take the local news for a ride. An Ohio station featured the story of a man who said he captured a UFO in a picture he took with his tablet while vacationing in California.

A picture captured on a cell phone of UFO formation over the house or ghosts in the living room can be passed on to an unsuspecting friend or relative who doesn’t know you used an application to create it.  Local news will report the story without doing much due diligence to sniff out fakery even when it’s ridiculously obvious. People love this stuff so critical assessment of the claims is practically non-existent. 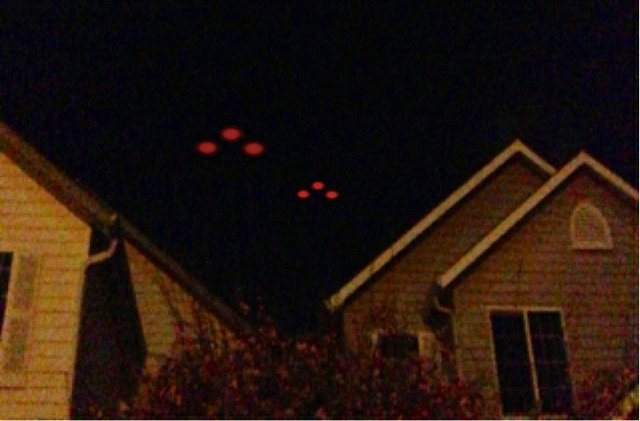 2012 was the year when the world went wild for sky noises that sounded like trumpets announcing coming Mayan Apocalypse. While some recordings were genuine local industrial noises, many were deliberately hoaxed to make it seem like the same eerie musical tones were heard around the world. These noises are still discussed on mystery mongering websites; people STILL don’t know how many of these were hoaxed.

Look! What is that thing?

It could be a remote controlled UFOs or a nifty LED contraption constructed just to pull a prank. It happens all the time. See this example from Connecticut. A Vancouver science center promoted a UFO video to drum up interest in their exhibits.

People do this just to see how many hits they can get on YouTube or a website. It gets posted on Reddit and viewed by millions of people, some of whom believe it’s real. Some UFO videos are done by professionals with computer graphic imagery to make them look VERY impressive. They are so impressive, in fact, that this is a hint they are hoaxed. More than one person will notice a football-field sized floating craft in the air.

Even if you can’t make heads or tails out of photo manipulation software, you can still fool your community with social media tricks. Because of the ability to pass photos around the world in an instant, a commonly used ploy these days is to use real photos in manufactured situations. Last year, a photograph of a “black panther” (a melanistic leopard) circulated around Facebook multiple times. The claim was that the big cat was caught on a game camera in Texas, then Louisiana, then Oklahoma. However, with the internet also comes some powerful tool for debunking images. Online image search tools allow you to find where else the photo has been used. [Check out Skeptools] Typically you can trace the picture to its original source or at least far enough to know the current claim is NOT accurate. In the case of the big black cat photo, it was taken in Africa – right where he belonged. The Louisiana Department of Wildlife had to tell people to knock off passing the story around. Hoaxes waste their time as well as making people fearful over nothing.

The Bigfoot world possibly suffers the most right now from hoaxing. From terrible pictures to staged videos, fake DNA, and elaborate stories, it’s fair to say you should not believe ANY claim of Bigfoot evidence as the majority of it is bogus on purpose.

Rick Dyer claims to have the body of a Bigfoot he shot quite a while ago. I can not fathom why the press gave Rick Dyer any space to tell his story. They should be embarrassed they did. Dyer has previous hoaxing experience, being part of the crew who faked the famous Bigfoot in a Freezer scam of 2008 in Georgia. They even got a press conference out of that with media reps in attendance. So, if you believe that his latest “body”, which looks more like a sideshow gaff, is the real deal, you need to take what I’m saying here to heart. It’s more likely to be a hoax than Bigfoot.

Hoaxes can be constructed for advertising a product. Exhibit A: the Salinas crop circle to promote NVIDIA’s new computer processor.

Or they can be constructed for propaganda purposes. Major media circulated the story that North Korean supreme leader Kim Jong-un executed his uncle by feeding him to a hungry pack of dogs. They had no evidence and couldn’t easily check the source. This seemed like something the North Korean ruler might do. It sounded like plausible drama, for about 10 minutes.

Thanks to the Internet, anyone, anywhere, has the opportunity to pull a media stunt with a hoax to gain some attention, web hits, ad revenue or even additional cash opportunities. It’s happening every day. It would be absurd to say hoaxing is rare or difficult. It’s common and easy. It’s naïve to assume that people won’t pull egregious tricks, even highly elaborate plans, for just a laugh or 15 minutes of fame.

Hoaxes must always be a consideration. The odds that someone is deliberately pulling your leg are FAR greater than the alternative – that they gathered solid evidence of something paranormal.

Hear or see news that sounds astounding or bizarre? Before you pass it along to all your friends or get your hopes up that Bigfoot has been found, check places like my Doubtful News site or Snopes.com. Odds are it’s a ruse.