I can’t recall when I first heard about Slender Man but since he was only created in 2009, it must have been relatively recently. He is, however, one of those characters that you would SWEAR has been around for a much longer time and has a history. The truth is, he was created by an imaginative mind and he just worked.

I was listening to It’s A Thing, the conveniently-sized podcast by two of my favorite Tech reporters – Tom Merritt and Molly Wood. It’s a trend-spotting show. Tom’s thing was ‘Slender Man’ which he heard about from some kid. Slender Man is a “thing” indeed.

(The) Slender Man was born from a photo editing contest on the Something Awful web forums in 2009 when “Victor Surge” submitted for evaluation two images of groups of children with a tall, thin, creepy faceless dude in a black suit. For effect, the submitter added a story to go along with it establishing that the figure brings death and bad luck.

Along with his stretchy, tentacle-like arms and hairless pate, whatever more you need to know about Slender Man can be found here at Know Your Meme, at the Slender Man Wiki, and on this adorable video.

No creation of this sort is pure, but likely draws from mythology and folklore with motifs that are shared across the world. But the curious thing I heard about Slendy is that he may LITERALLY be created by the mind. That is, his popularity in the public consciousness is so great that he has become a thoughtform, a tulpa, that he was imagined into existence and now he is REAL.

The Reddit tulpa page is where you can talk about your own self-created imaginary friend. It’s a little loopy there. Remember, your new friend has a mind of its own and feeds off your energy.

Nope, I don’t really believe this fantastic stuff but the tales grow taller on down the line. Is it a case of an evolving creature that draws life blood from our minds? Sort of. He’s a meme (Dawkins, 1976, yes THAT Dawkins, invented the word ‘meme’), he does change to suit the environment. Thanks to existing mostly on the web, where he has replicated and been passed on, Slender Man has traveled all over the world.

You know that old saying “seeing is believing”? Well, in this case, believing is seeing. If kids believe in monsters, they see them all the time. Since Slender Man is now a popular guy due to the non-copyrighted idea that was worked into art, online games, and all kind of media, he is believed. And he is “seen”, supposedly.

Tulpas have been used to explain many different monsters and strange creatures that people say they have seen but SHOULD NOT have seen according to natural laws. They don’t behave according to the rules of this earth. According to the Slender Wiki, Slender Man has different characteristics depending upon whom you ask so it’s hard to maintain the collective thoughtform “energy” as a single unified thing. That’s also a bonus of no copyright. 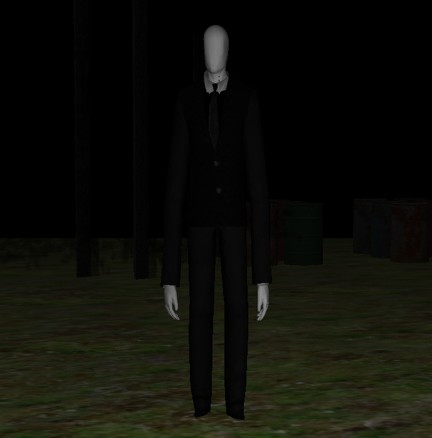 An alternative explanation for Slender Man is as the manifestation of quantum theory or probability itself. He is a collection of particles that acts as one particle – he teleports instantaneously, he is never seen standing in a fixed position until you observe him as the quantum state collapses to that certain location, and… you’re dead.

The Slender Man legend expands into all media with his main money-making job these days is appearing in ARGs or alternate reality games where his mythos will surely grow, like his spindly, noodly appendages. He’s sort of a cross between a faceless horror, a man in black, and an alien.

Some would say Slendy’s social “cousin”, Trender Man, is more gregarious. He is frequently seen out shopping and trying on trendy clothes. He’s a bit of a showoff, but he makes you buy things, not die.

My least favorite of the Slender family is Spendorman. He’s just annoyingly happy.

So, the Slender family… now you know. Be afraid.

My Tweets
Back to top